In 2015, Gary Cox, President of Texas State Bank in San Angelo, was interested in providing customers shaded parking from the brutal West Texas summer sun. Gary became inspired to add a solar array to the carport after noticing an installation nearby at the San Angelo Fine Arts Museum. After inquiring with the museum, Gary chose NATiVE Solar for solar design and installation services.

Texas Bank originally proposed a small carport for eight covered parking spots. Yet, because of NATiVE Solar’s proficiency with commercial project economics, including the leveraging of local and federal incentives, Texas Bank upgraded to a system three times larger than the original one.

The final project is a 94.8 kW solar carport that will generate approximately 140,658 kWh annually, enough electricity to power ten Texas homes. The primary solar components are 300 SolarTec 315 watt solar modules, two SMA inverters and a galvanized carport structure manufactured by S:Flex. The solar array started generating electricity in February 2016, and over the spring and summer, the bank was seeing savings of $900- $1000 a month, or about 20% of their monthly energy bill. The monthly savings are on pace to offset the entire project cost in about 10 years, which is in line with the original project cash flow projections.

American Electric Power (AEP) provided a rebate for this project, but because of the late fall project start, NATiVE Solar had to work under a compressed construction schedule to meet the end of year incentive payment deadline. NATiVE Solar professionally and effectively handled the logistical challenges associated with this deadline. Much of this success can be contributed to the experience of the NATiVE Solar team with previous AEP solar installations.

Gary has been pleased with his all around experience with the NATiVE Solar Commercial Team, from the initial sales consultation to the final project walk through and he often refers NATiVE Solar to his customers. Because of the high visibility of the carport, Gary reports that he has at least one inquiry a day about the system. He does remind his curious customers that rooftop solar installations are generally less expensive than carport structures.

***Gary Cox is more than happy to be a reference. Feel free to reach out to Gary first hand and ask him about his experience of going solar with NATiVE Solar: GaryC@txbank.com 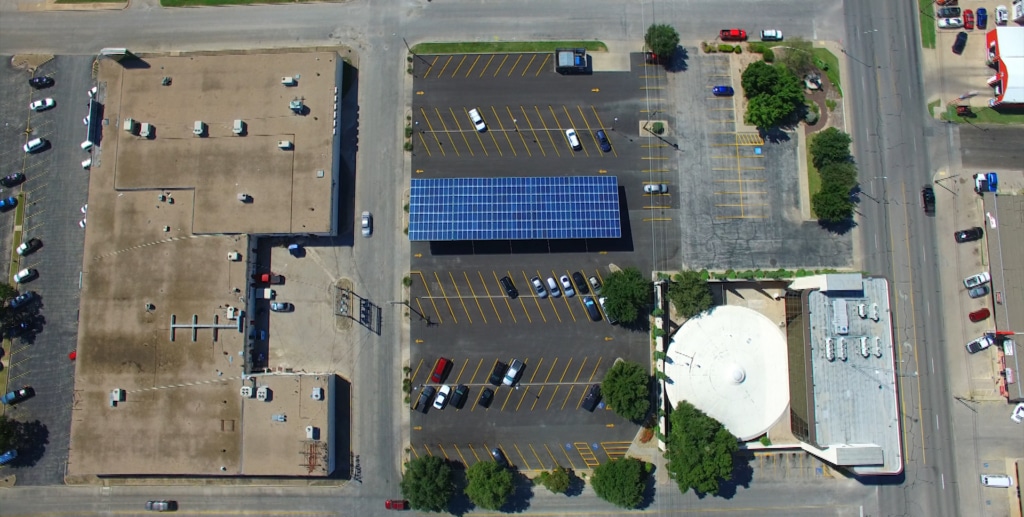