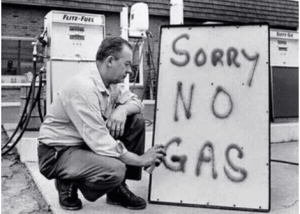 Energy has been a hot topic of debate for many decades in the United States. From our founding, we have powered our lives with wood, coal, petroleum, hydroelectric, natural gas, nuclear, and most recently, wind and solar energy. There is an overwhelmingly important need for the United States to become energy independent, and it goes beyond the limited source of fossil fuels and our dependence on foreign nations. It is a matter of national security and sustainably generating clean power is currently shaping our lives, future generations, and humanity as a whole. 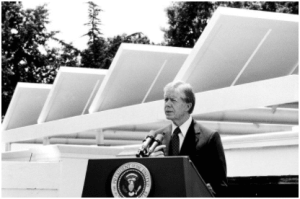 The oil crisis of 1973 reminds us of the inherent instability that results from relying on exported energy sources. Yet, disasters like 3 Mile Island, Exxon Valdez, Deepwater Horizon, and the Aliso Canyon leak remind us of the enormous environmental risks that accompany the extraction, storage, and creation of energy with traditional power sources. Combined with our understanding of human contribution to climate change, running our grid on local, sustainable, clean, safe energy is absolutely critical to the building of a strong economy in the 21st century. Recent news of the US backing out of the Paris Climate Agreement may raise questions on the future of green energy, but economic analysts predict that the greening of our electricity system is unstoppable. 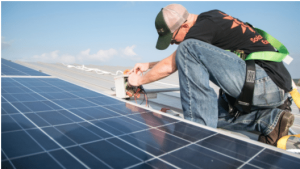 Solar energy is booming in the United States. Installation costs have continued to decline and that has accelerated the growth of the industry. Not only is solar providing a sustainable source of electricity for Americans while reducing the carbon footprint, the industry has also been a huge factor in stabilizing and growing the economy with jobs.

Below are some charts and graphs from Greentech Media, Solar Energy Industries Association (SEIA), and The Solar Foundation that show just how solar is winning.

Solar Growth in the U.S. 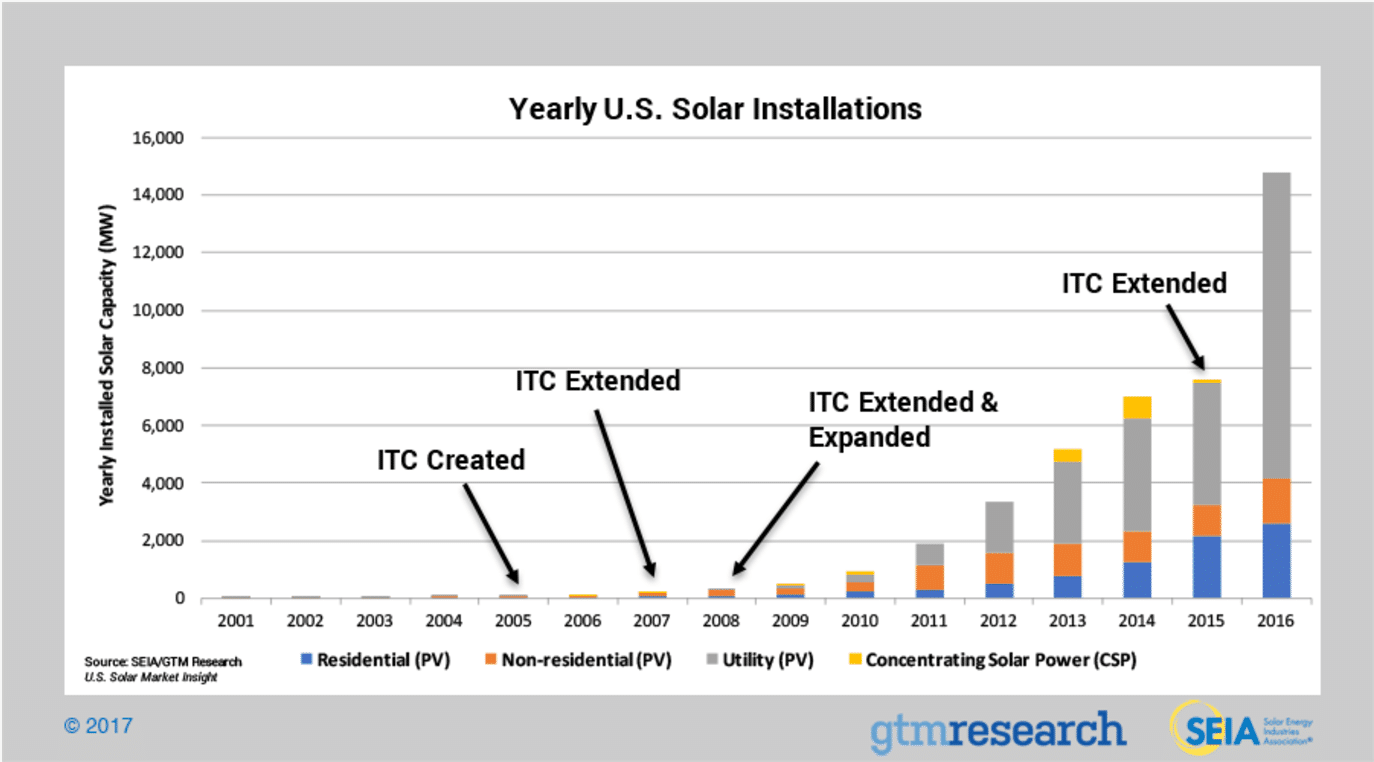 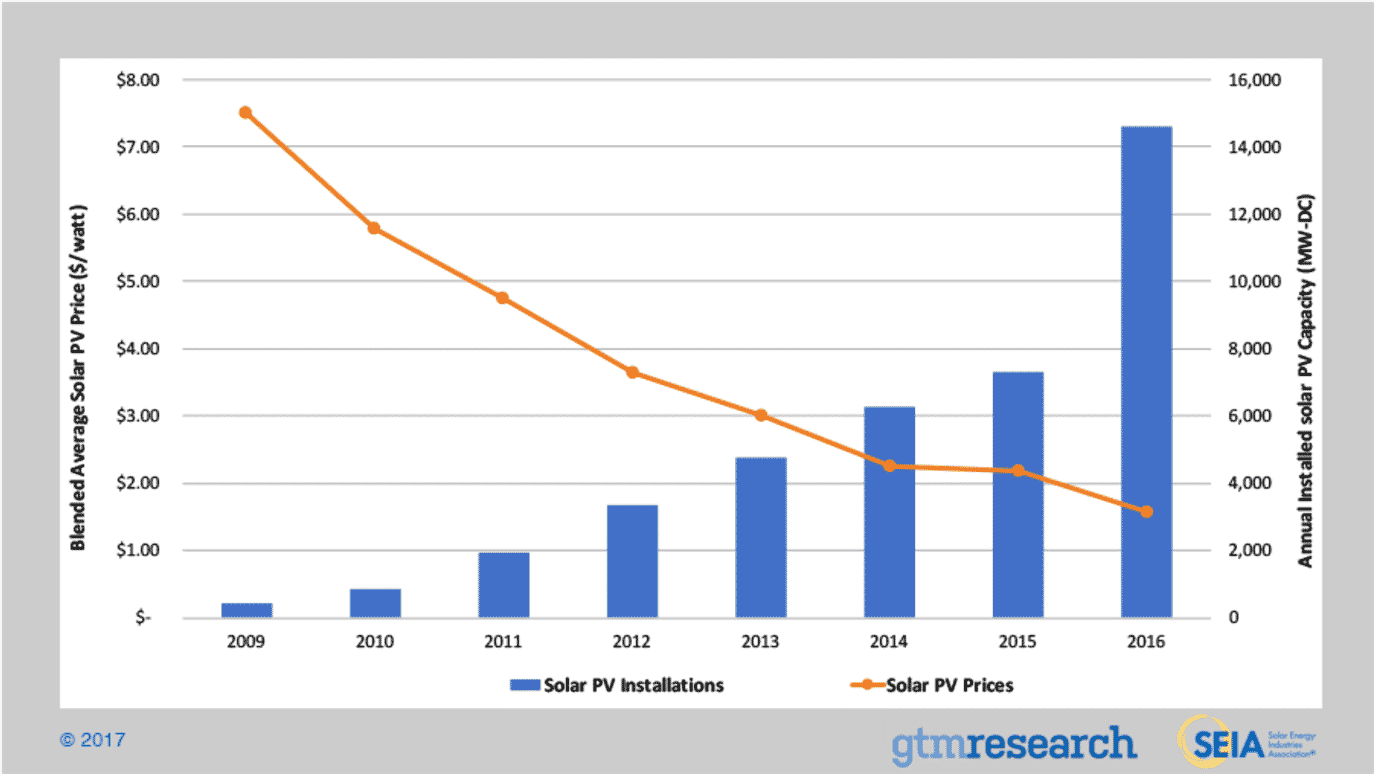 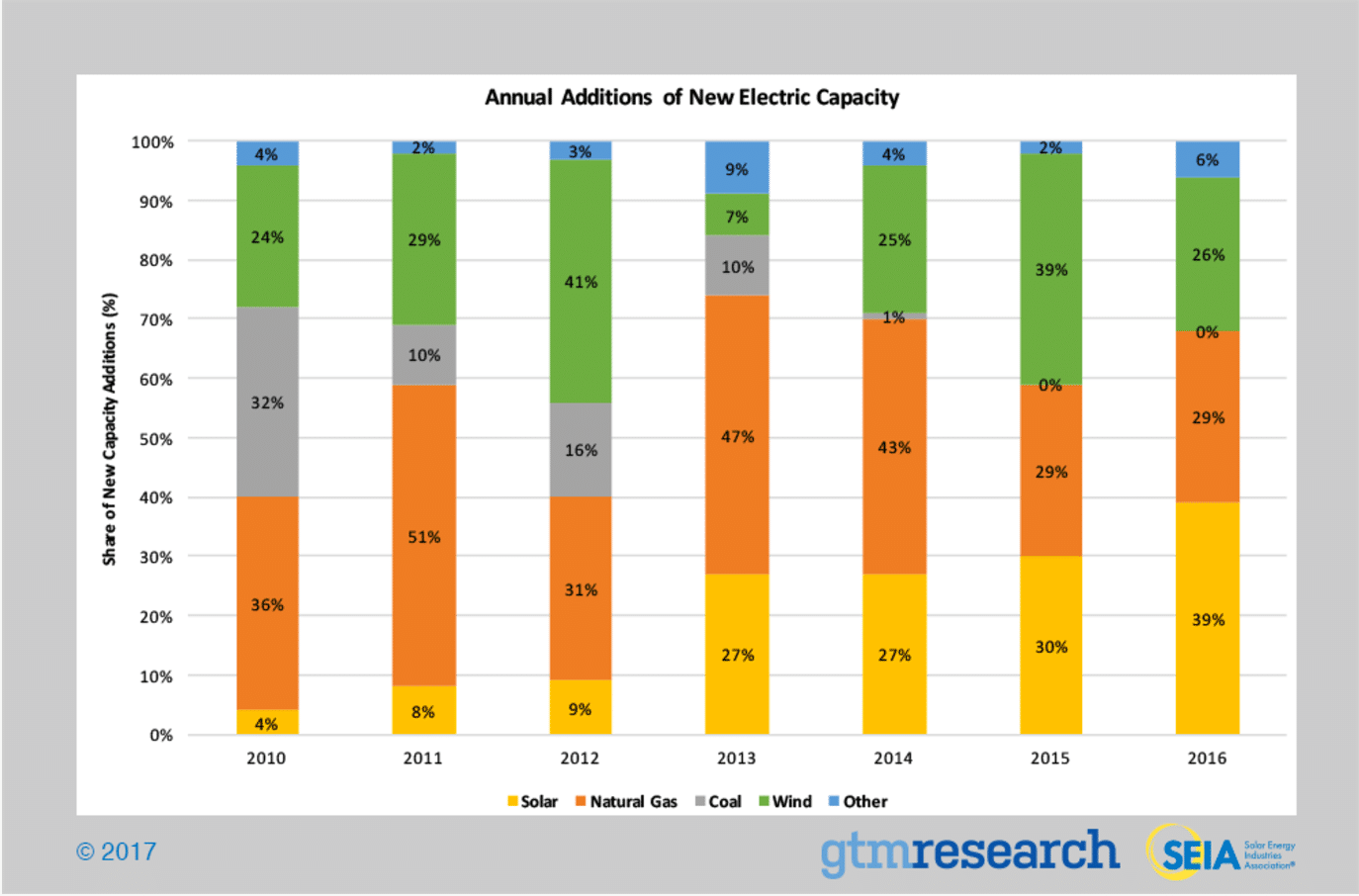 Utility, Commercial, and Residential Solar on the Rise 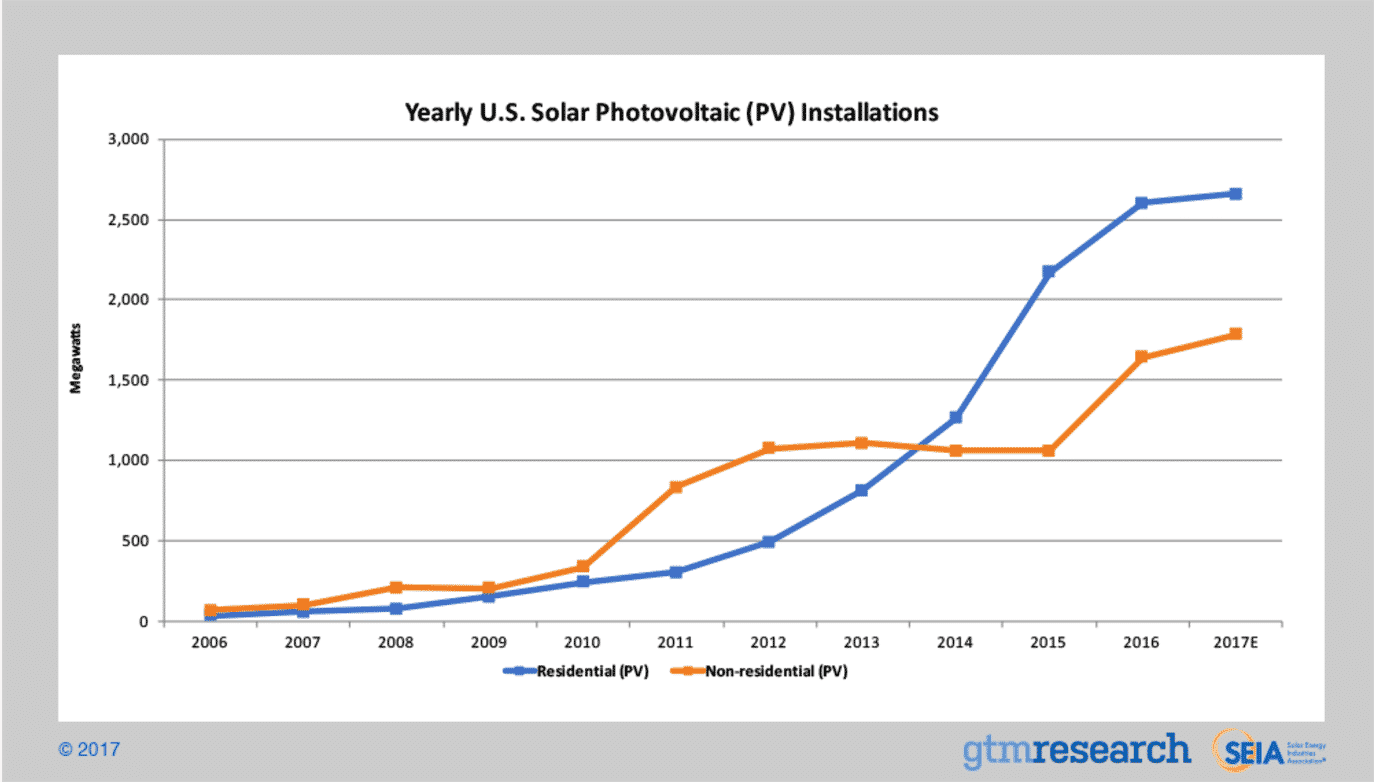 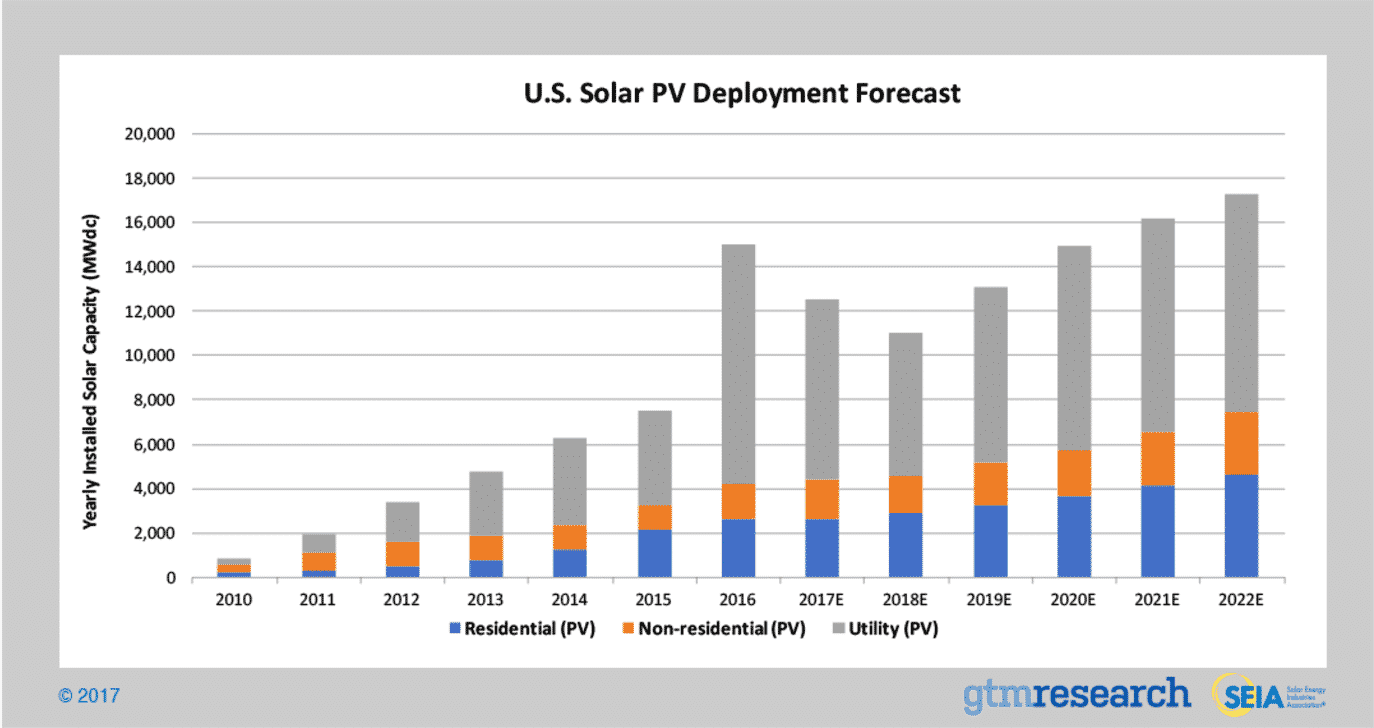 While the coal industry has been in relentless decline, Meister reports solar is creating jobs at a breathtaking rate, growing a staggering 12 times faster than the rest of the economy. The solar industry now employs more than twice as many Americans as the entire coal industry and just as many Americans as the natural gas industry. In fact, many coal, oil, and gas workers across the country that have lost their jobs found new careers in the solar industry. The 2016 Solar Jobs Census found that employment increased by over 51,000 workers in 2016 and the industry now has more than 260,000 solar workers! 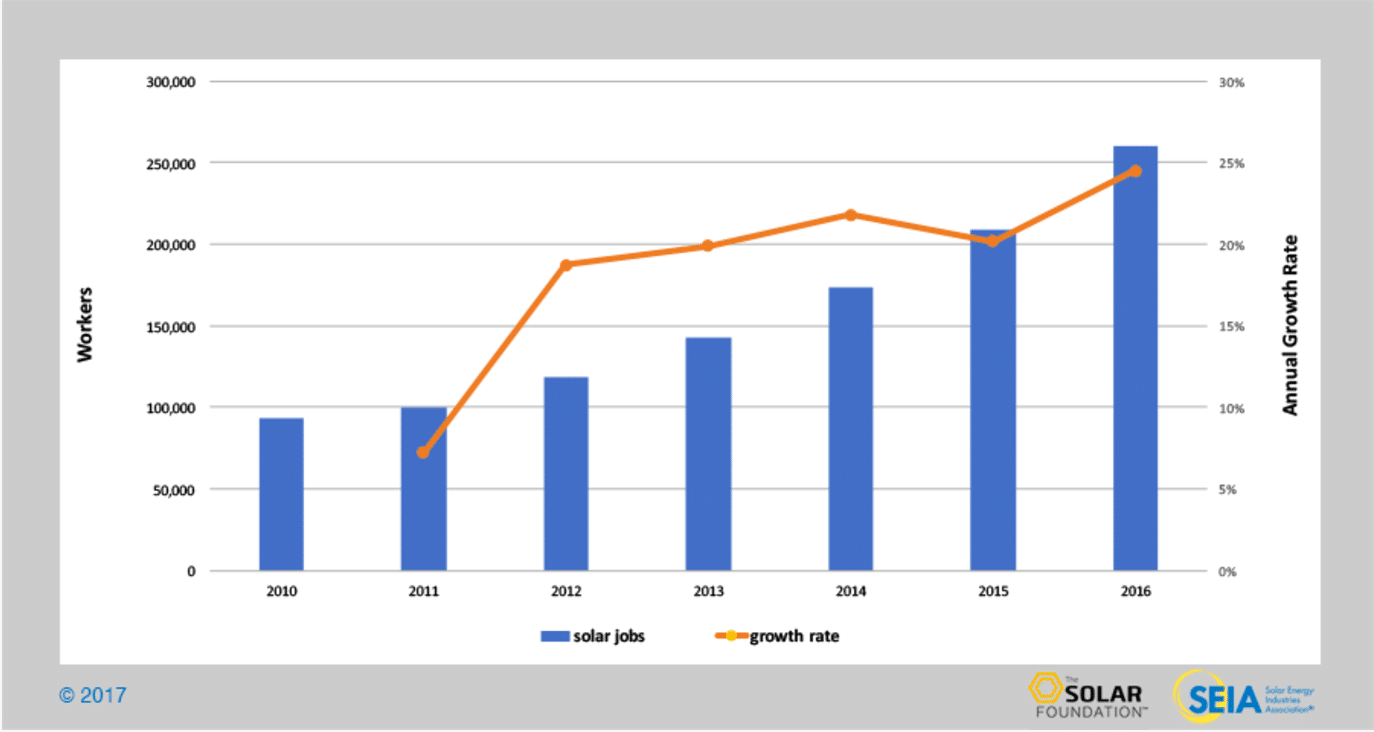 US Solar Jobs Highlights from 2016

With the demand for solar panels rising, it has become the single biggest source of new electricity capacity in the United States in 2016 and now makes up around 2% of all electricity generated in the country. And with solar energy now cost-competitive with coal, natural gas, and nuclear in most of the country, the industry is primed for growth in the next decade in every state.

We see all of these effects locally in Texas as well. This spring, ERCOT, the Texas grid operator, reported that 2016 saw a tripling of installed utility scale solar over the previous year. Additionally, we saw continued growth in residential solar installations throughout the state even as the Austin Energy, CPS Energy, and Oncor incentive programs continue winding down.

Solar is winning, at all scales. It is the only power source that has free fuel, minimizes negative environmental impact, creates local jobs, and is economically attractive in both large scale installations down to small rooftop systems. No matter where you are aligned on the social or environmental benefits of solar, the financial benefits of solar are undeniable. On large scale systems, solar power contracts routinely beat energy pricing from new fossil fuel plants. On smaller roof top installations on homes and businesses, the stable annual return on investment typically beats traditional market investment vehicles.

Interested in joining the solar revolution in its early stages and begin enjoying free electricity? Click the button below for a FREE estimate for your customized system and estimated return on your investment.