Before solar technology became a cheaper solution for power, traditional utility meters functioned as a one-way street. Electricity flowed in one direction–from a power plant to your home or business. Today, alternative energy led by solar and storage innovation has disrupted the flow by sending and receiving power in both directions. Utility meters have evolved from a visual inspection to determine monthly bills (yes, prone to human error) to smart meters, a step towards grid modernization. Think of our transition from a rotary dial phone to today’s smartphones as an analogy. 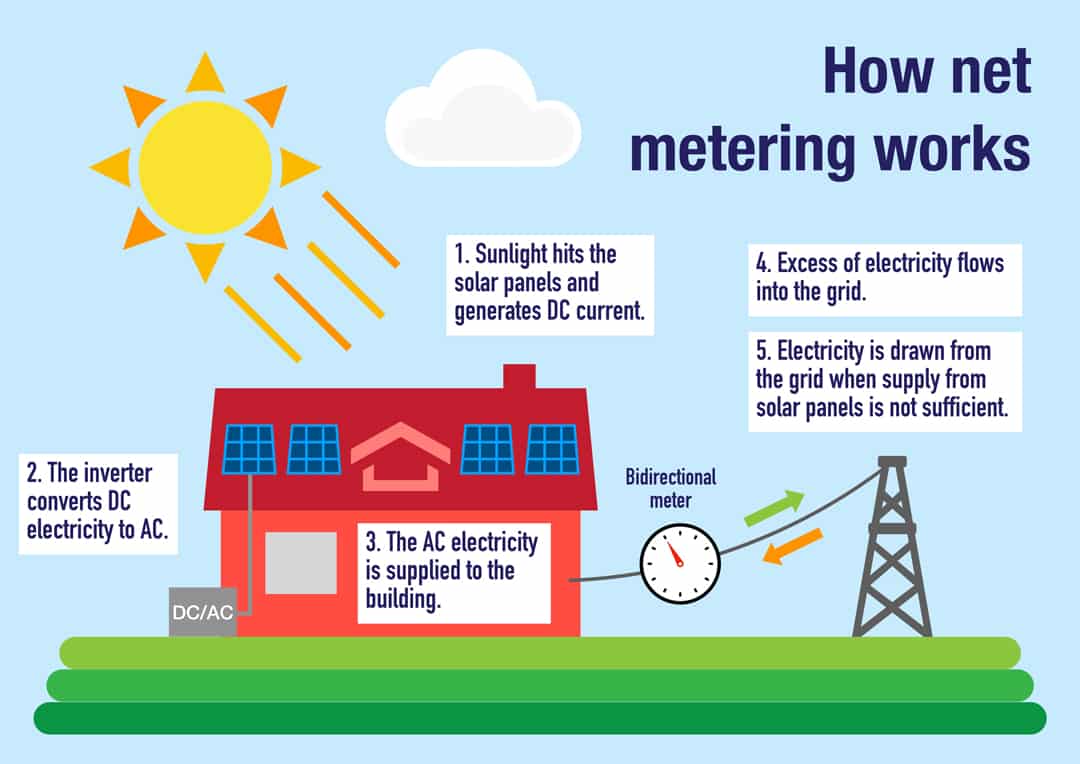 NEM 101: Smart Meters and Utility Bills
Simply put, net energy metering (NEM) is a billing mechanism that allows homeowners or businesses that generate electricity with their own solar array to deliver excess power back into the grid, and receive a credit in return. This credit is monitored by advanced “smart” meters with the ability to run backwards. When the meter shows a negative reading, it means that the home or business’ solar array produced more energy than was consumed. These credits can then be used to offset electricity that’s purchased when the solar energy system is not generating enough electricity to meet the establishment’s needs, such as at nighttime. Utilities then bill customers only for the electricity used during each billing period that was not generated by the prosumer’s solar array. This type of metering has led to controversy over who benefits at the expense of others, but comprehensive analysis shows that contrary to much recent utility rhetoric, net metering produces benefits for all customers, including those without solar.

Why is the Value of Solar Controversial?
Controversy regarding net metering stems from different interests on the grid. Utilities in the United States have led a largely unsuccessful campaign to eliminate net metering, mainly because distributed solar and other energy efficiency measures pose a challenge to electric utilities’ existing business model. Fortunately, cost-benefit analyses, whether conducted by PUCs, national labs, or academics, have increasingly concluded that the economic benefits of net metering actually outweigh the costs and impose no significant cost increase for non-solar customers.

One of the most important benefits of net metering for customers producing their own solar power is that it can save them hundreds of dollars on their utility bills every year. Another benefit that impacts all utility customers comes from the fact that residential solar is localized and distributed. The excess local energy produced by customers’ arrays reduces strain on the grid’s distribution and transmission infrastructure and minimizes energy loss from sending voltage many miles from the nearest power plant.

Prosumers and Value of Solar, Storage and Distributed Energy
In addition, a review of 11 net metering studies found that distributed solar illustrated the benefits to power grids through reduced capital investment costs, avoided energy costs, and reduced environmental compliance costs in 2015. Another study commissioned by the Maine Public Utility Commission concluded that solar power provides a substantial public benefit because it reduces electricity prices due to the displacement of more expensive power sources, reduces air and climate pollution, reduces costs for the electric grid system, reduces the need to build more power plants to meet peak demand, stabilizes prices, and promotes energy security. These avoided costs represent a net benefit for solar naysayers. Now it’s time to move forward from a consumer to a prosumer!

According to the majority of studies conducting cost-benefit analyses of net metering, and importantly, those that include the greatest variety of factors, such as environmental impact and the costs associated with it, net metering is beneficial for everyone except utility companies. It’s no wonder then that these companies are lobbying against it. So how do we get utilities on board with net metering? Traditional utilities need to restructure their existing business models and learn to adopt alternative energy. The reality that solar prosumers avoid generation costs, while those without still pay is a reward for reducing strain on the grid and offering community microgrids for backup power in the event of grid outage. Change is inevitable, and utilities are going to have to get on board if they want to benefit as well. Owning and selling their own solar power to customers is one option. Only time will tell if they are innovative enough to take advantage of the opportunities that new smart meters present.

Get a Free Solar Quote for Your Home