With summer’s temperatures causing electric bills to rise, many homeowners are asking this question, and the answer isn’t the same.
Read the Austin Home Magazine article featuring a NATiVE Solar installation and perspective. 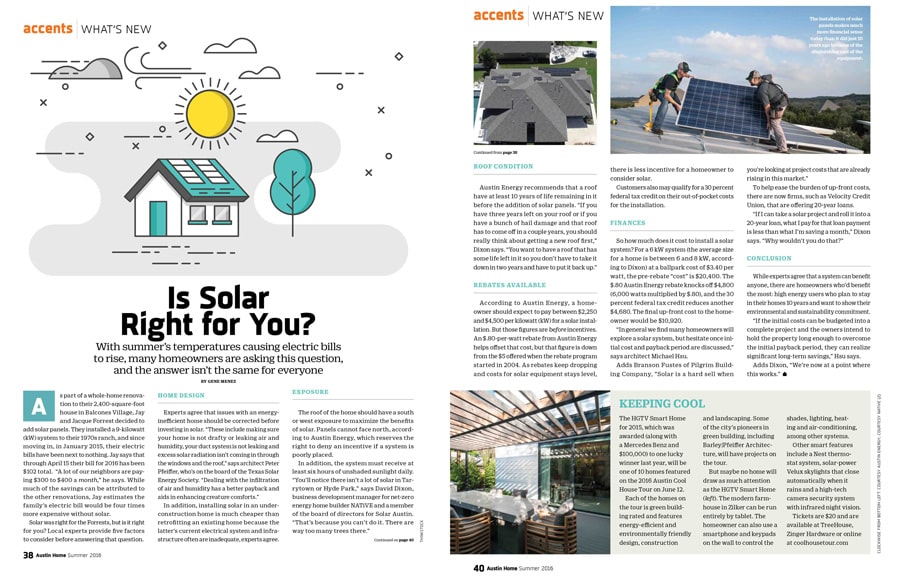 As part of a whole-home renova­tion to their 2,400-square-foot house in Balcones Village, Jay and Jacque Forrest decided to add solar panels. They installed a 9-kilowatt (kW) system to their 1970s ranch, and since moving in, in January 2015, their electric bills have been next to nothing. Jay says that through April 15 their bill for 2016 has been $102 total. “A lot of our neighbors are pay­ing $300 to $400 a month,” he says. While much of the savings can be attributed to the other renovations, Jay estimates the family’s electric bill would be four times more expensive without solar. Solar was right for the Forrests, but is it right for you? Local experts provide five factors to consider before answering that question. Austin Energy recommends that a roof have at least 10 years of life remaining in it before the addition of solar panels. “If you have three years left on your roof or if you have a bunch of hail damage and that roof has to come off in a couple years, you should really think about getting a new roof first,” Dixon says. “You want to have a roof that has some life left in it so you don’t have to take it down in two years and have to put it back up.”