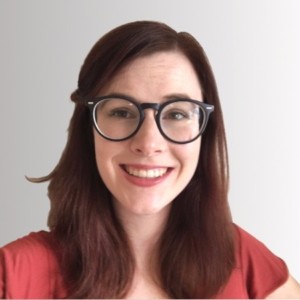 NATiVE Solar had the pleasure of working on a unique, very clever commercial solar project in Austin, Texas. NATiVE installed solar panels on a shipping container structure by Falcon Structures that is being utilized by Rocket Electric Bikes for a remote electric bike rental store that doubles as a charging station.

Earlier this month, Paige Welsh, Content Manager for Falcon Structures, sat down with NATiVE Solar’s Business Development Manager David Dixon, and discussed this idea of installing solar panels on a shipping container. The original article can be found on Falcon Structures website.

Paige: Let’s talk containers, specifically. How do you secure panels on the roof of a container? 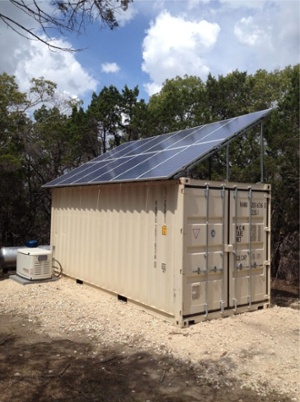 David: Normally we’re putting solar on roofing, but containers are little different. We have to fabricate the racking. Basically it’s a custom welding project, but it certainly can be done. Ideally they’re tilted at an angle towards the south roughly equal to the latitude of the location. The further north or south you go from the equator, the greater the pitch of the panel.

Paige: Can you fit enough panels onto a container roof to power it on a sunny day?

David: It depends. We put solar panels on a container for a guy who was powering an RV on his land. He had a generator, and the container was full of batteries to support himself. When we’re on top of a container, we need to build a custom racking system to hold up more than one row of panels, which what we ended up doing for him. (See in image with tan container.) Rocket Electrics can charge their e-bikes with smaller panels on their 20-foot container-based rental store front because they have a relatively low energy load.

Paige: Could I bank the power my panels produce on a sunny day?

Paige: For some people, the dream is total off-the-grid independence. Is that feasible?

David: Going off the grid is romanticized, but it’s really requires a different lifestyle. We’re used to having power at our fingertips, unlimited, 24 hours a day. When you’re off the grid you have to track whether you have enough power to run the microwave in the evening. My in-laws live off the grid, and when they go to buy appliances they’re looking at how many watts it uses. It becomes more feasible in a tiny home, but you have a completely different relationship to energy when you are living off grid.

Building a large enough battery bank with the capacity to provide reliable power can be done, but it’s very expensive. Financially speaking, remaining grid-tied so you can have a back up is the best way to go.

Paige: I did some math to understand the power load of a container home, and I was startled by how much power things like my oven and heater draw, but going off the grid with a simple open office seems possible if it’s just running A/C, lights, and a computer for eight hours a day.

David: You could, but the thing you have to consider is that solar is seasonal and weather dependent. This past February we had around 15 cloudy days. If you’re relying on a certain amount of power, but it’s overcast ten days in a row, what are you going to do? You may have to drastically reduce your energy consumption; you may have to add a generator as backup. There’s a lot to think about to make sure you’re covered.

The Economics of Solar for Your Home or Business 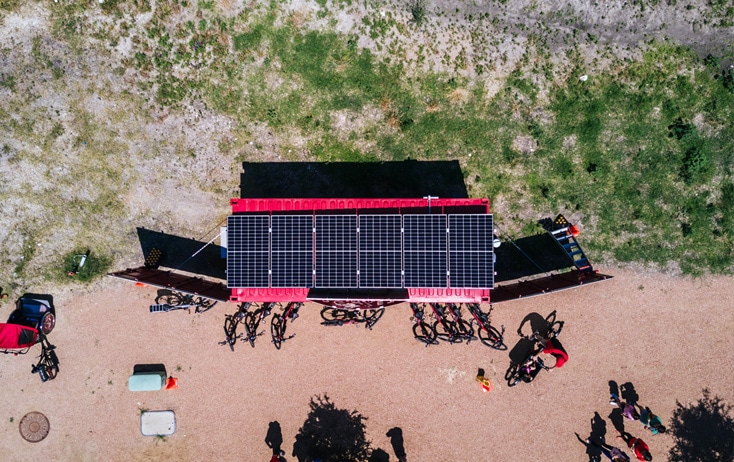 Paige: Why should people think about installing solar in their homes and businesses?

David: When we first started 10 years ago, the value of solar for our clients was usually driven by environmental benefits. With costs coming down, solar has become a predictable, financial investment. Every month you are offsetting the costs of your electric bill.

David: If you pay for solar installation upfront with cash, you can realize about a 10% return on your money. But more and more people are financing solar as they would a car with a fixed monthly loan payment that is often equal to or less than their power bill. In these cases, the solar is paying dividends right from the very start. Once the loan is paid down then the savings on your electric bill go right into your pocket every month.

Paige: Are there any tax credits for Texans who want to install solar?

David: Currently in Texas there’s no state-level tax credit, but there’s a 30% federal tax credit which is available to anyone in the U.S. The one thing that Texas does allow for is an exemption of your solar array from your property tax assessment.

Paige: I’ve heard some power companies charge a fee to be on the grid. What should Texans expect from their utility companies?

David: Texas is a complicated market because there’s such a huge number of power providers; you have all these power companies with different policies. Most power companies do have a fixed monthly fee to be connected to the grid. 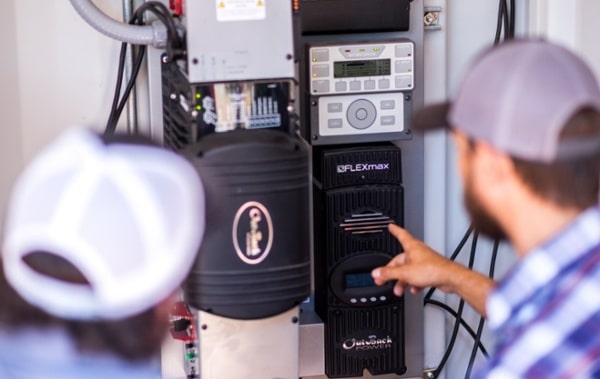 Paige: What is the lifespan of a solar panel?

David: They have a warranty for 25 years and they’re engineered to last 40 — so a long time.

David: I find anecdotally it does. One frustrating thing is that there haven’t been studies or white papers proving exactly how much value solar adds to homes in Texas. Part of creating a solar market is getting realtors and appraisers on board. They can tell you how much having a marble counter top can help your home value, but they often can’t tell you about solar. We show people how much money they’ll save based on their solar’s size, but I don’t have concrete case studies about how their solar investment translates to property value. It’s something we’re really working on.

Paige: Is there anything else you want people to know about solar?

David: Even looking back five years ago, you’d be shocked by how much the solar market has changed. There’s been a rapid decrease in pricing and new financing options make solar available to more people than ever before. People who have looked at solar in the past should look again and see if it makes sense.

You can learn more about Falcon Structures by subscribing to their blog and following them on twitter and facebook. If you have questions about installing solar on a container structure, contact us at 855-253-6284 or info@buildnative.com.