Since last spring when Elon Musk publicly pre-announced the market arrival of the Tesla Powerwall, the battery question is one of the most frequent questions that we have been fielding from potential customers. To answer it, let’s back up a bit and put some context around solar and battery systems in the US.

Solar plus battery systems are not new. People have been installing solar with batteries for over 40 years. The need for batteries has traditionally been justified by homes or electrical loads with no grid connection, where batteries are necessary to store energy for use at night. These off-grid systems are typically custom built and consist of several batteries, specialized inverters, and charge controllers.

NATiVE has been installing solar systems with batteries throughout Texas since 2008. While we have designed and built off-grid systems, the bulk of our battery systems are also grid tied. The primary motivation for these systems is to provide backup power to critical loads in the case of a grid outage. While grid-tied systems are the most economical way to install solar on your home, they have one functional drawback: when the grid goes down, the solar system shuts down. Electrical code requires this functionality to protect any linemen working on the grid.

To maintain power in the case of a grid outage requires a grid-tied battery backup system with a critical load panel and batteries. This is not a new application, but it represents a small percentage of the systems that we install – mainly because the initial cost is high and grid reliability is not a primary concern for most homeowners. In this arrangement, when the grid goes down, the power to critical loads automatically switches to the battery/solar backup source. In almost all cases, there are only a few circuits that are backed up, typically refrigerators, well/rainwater pumps, and a few lights and plugs.

So, what has changed? Why is there so much discussion now around batteries?

1. New battery technologies are coming to market and their prices are rapidly declining.

Electric vehicle (EV) development has focused a lot of research and development into battery technologies in the past several years. It’s no coincidence that car companies like Tesla and now Mercedes are offering residential battery systems to compliment their EV’s. We are still on the steep side of the cost curve and expect batteries to continue to get more efficient and less expensive in the foreseeable future. 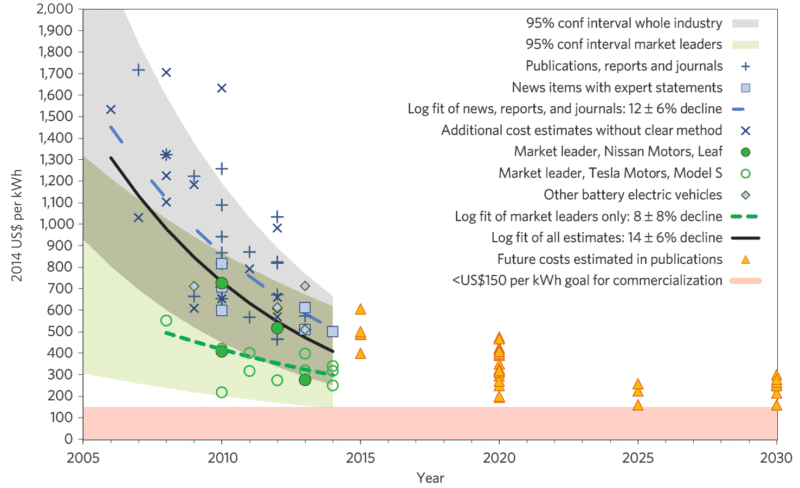 Previously, battery based solar systems involved multiple products, individually sourced and custom configured by system installers. New products are combining these system components into smart packages with elegant footprints and user friendly controls. The advances happening in the battery market are reminiscent of what we saw with solar modules and inverters: increased volume driving down cost and product integration improvements making the user experience easier to setup and maintain.

For battery-less systems, the grid acts as a “virtual” battery by accepting excess electricity generated by a solar array. In some markets, there is no incentive or allowance for residents to send excess electricity to the grid. Some utilities will charge (and credit) a premium for power during peak load hours, which usually fall between 4:00-7:00pm. Alternatively, power during the off-peak times is the least expensive. In these markets, it makes sense to store energy when it’s cheap and use it during the most expensive times of the day.

So with all this in mind, the initial question remains: Should I install batteries with my solar?

The answer depends on your motivation.

Battery systems will be a standard offering with solar in the next five years as the technology advances and improves, prices continue to decrease, and utilities develop rate structures that value a home storage resource. We are on the leading edge of the storage curve. If you are interested in maximizing the financial investment of your home power plant, then now is not the time for batteries. To start saving money today, consider a batteryless solar system. On the other hand, if you are an early adopter or are interested in grid backup power, then talk to us now about what it would take to include (or add) batteries to a solar array.

To stay informed on this evolving market

Your privacy and trust are important to us. Your information is kept private and you will not be spammed.[mc4wp_form id=”21681″]