Hurricane Maria is regarded as the worst natural disaster on record in Puerto Rico. Although this tragedy struck back in September of 2017, the effects are still being dealt with today. The catastrophic damage caused by the tenth-most intense Atlantic hurricane on record 4 months ago has still left almost half of Puerto Rico without power today.

Out of every tragedy, comes new strength and hope. Tragedies of this magnitude give rise to a wave of generosity and a collaboration that embraces the best of the human spirit. NATiVE is honored and proud to be part of a group of solar companies collaborating with a global disaster relief agency that is bringing Portable Emergency Solar Power to Puerto Rico. 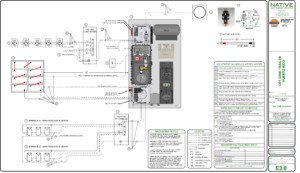 NATiVE’s Lead Designer, Elijah Johnston-Heck, did the electrical design for the Emergency Solar Power trailers. The design is a 3kw system built onto a trailer with a fold out array and 15 lockers with outlets in them. All the solar PV equipment is locked inside. The trailers can run fully off grid, or be plugged into the grid once it’s restored.

The first three are being built in Massachusetts and shipped down. The future plan is to be able to build them down there based on the first ones thru Amurtel, our Puerto Rico Amicus partner.

Amicus is still in the process of trying to raise money for the rest of the equipment. You can donate here:

More information about the project can be found on the Amicus Solar Power on Puerto Rico website, Facebook page, and below in the article written by our Amicus partner Phil Coupe of ReVision Energy.

In response to the ongoing humanitarian disaster in Puerto Rico, a group of U.S. solar companies and a global disaster relief agency are mobilizing to bring portable emergency power trailers to remote areas of the unincorporated U.S. territory.

Roughly 40% of Puerto Rico is still without power and clean drinking water after the catastrophic Hurricane Maria tore across the island in September. Hundreds of thousands of island residents are risking serious illness daily as they are forced to collect water from streams and other untreated water sources that are known to be contaminated. Without access to power to charge cell phones or computers and roads destroyed or blocked by fallen trees, many island residents are isolated and unable to get information on aid opportunities.

Amurtel, a non-profit disaster relief agency, and Amicus, a purchasing cooperative of about 50 American solar companies, have created a partnership to bring emergency solar power and drinking water systems to those struggling to recover from the hurricane. The effort, called Power On Puerto Rico, is enlisting volunteers from Amicus member-companies to design and build Solar Outreach Systems (SOS) that will be delivered to the areas of greatest need identified by Amurtel staff on the ground in Puerto Rico.

Located close to the equator where solar energy is most abundant, Puerto Rico is an ideal geography for harnessing solar energy. The Solar Outreach Systems, which are portable community-based communication, water purification and emergency power hubs, will immediately assist on-the-ground relief efforts.

The SOS units will be deployed by the Aireko Foundation, an offshoot of Aireko Energy Solutions, which is a Puerto Rico-based member of Amicus. These units will be loaned to the communities for the duration of their need and then be redeployed to other disaster areas around the globe as needs and events dictate.

“The aftermath of Hurricane Maria has been as difficult and often even harder than surviving the storm itself, especially for those communities in the interior of the island. After more than two months, reestablishment of electric power for those communities is still unknown, and the quality of water is not the best – for those communities that are lucky enough to have this service, which are very few. Sadly, those communities are far from returning to their normal lives,” said Hector Rivera Russe of Aireko Energy Solutions. “I’m deeply touched by how my Amicus partners, alongside Amurtel, have jumped without hesitation, to putting their time, resources and effort to give relief to my people in Puerto Rico. I will always be thankful to them,” said Russe.

The first three SOS units are being manufactured in the North Andover, MA warehouse of ReVision Energy, a founding member of Amicus recently named the #1 Rooftop Solar Installer in New England by Solar Power Industry magazine. “We are chomping at the bit to build these portable emergency power units,” said Phil Coupe, a co-founder of ReVision Energy. “The great news is that we already have more than enough volunteers to build the units once we obtain all the necessary components.”

Each SOS is comprised of an enclosed trailer with exterior solar panels and power outlets, along with batteries and a water purification system inside the trailer. Once parked in a sunny location, the exterior solar panels are deployed and switched on to provide 300-400 watts of emergency power while simultaneously purifying up to 600 gallons of clean potable water a day. Each SOS unit can charge up to 10 phones and five laptops simultaneously. Two large outdoor floodlights affixed to the roof of the SOS units will enable community members to have light at night.

The first 10 Puerto Rican communities that will receive SOS’s have already been identified, and are anxiously awaiting their units. Each community will be responsible for the maintenance and security of their unit, but there will be no cost associated with the use.

Power On Puerto Rico is a powerful way that individuals can help fellow Americans in crisis. Although all of the SOS design work, and many of the components, have been donated, Amurtel and Amicus need additional funds to finish manufacturing the SOS units and to deliver them. The estimated cost of each SOS unit is $15,000 to purchase the trailer base, water purification system, charging outlets, lights and batteries.

How can you help? Tax deductible donations of materials, services and cash contributions are being coordinated through http://www.amurtel.org/get-involved/donate/

Below is a photo of the first three enclosed trailers that will be converted into Solar Outreach Systems once all materials arrive at ReVision Energy’s decarbonization facility in North Andover, MA. 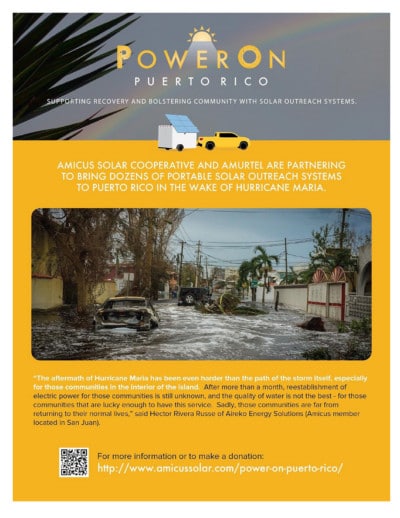